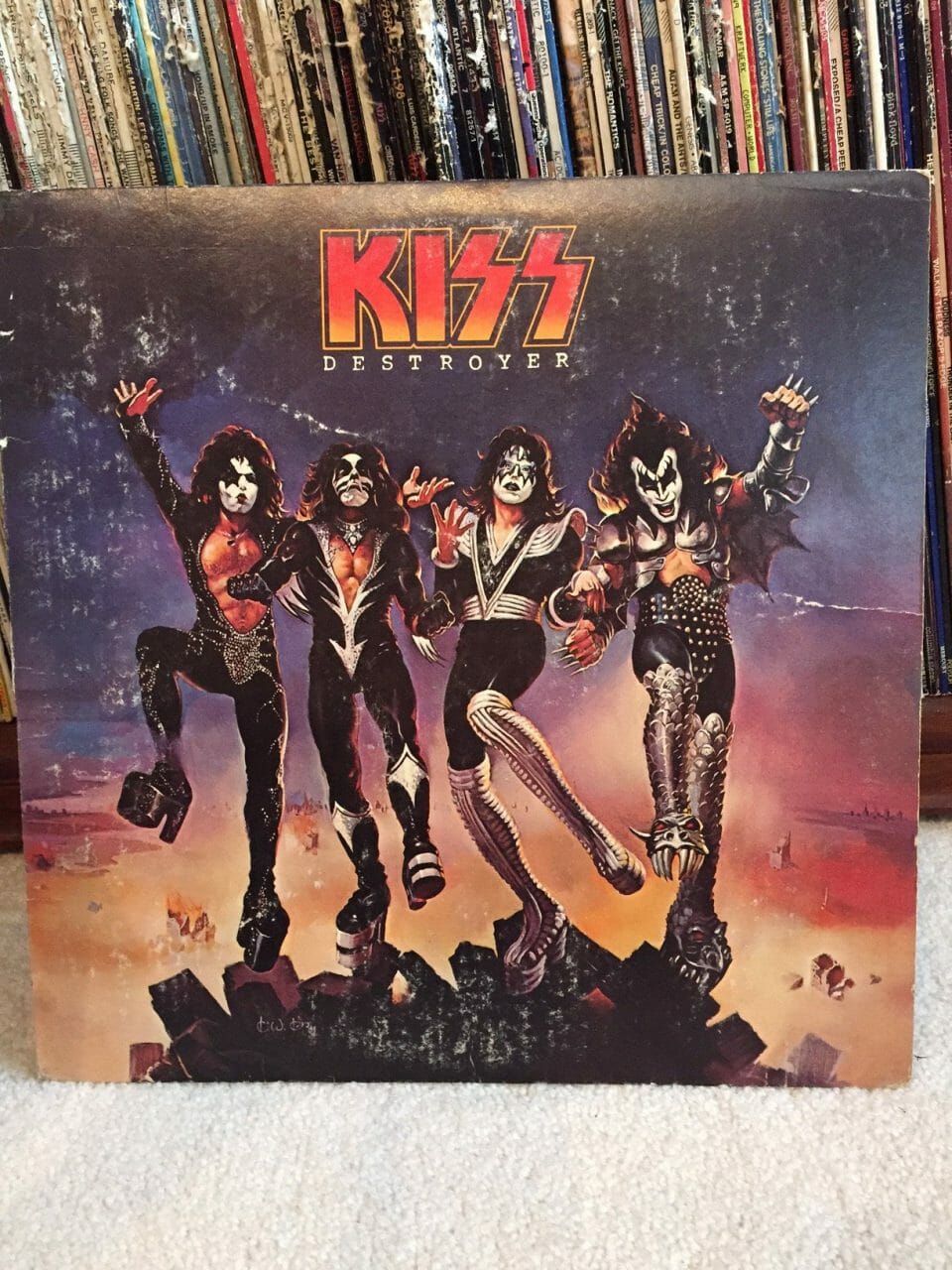 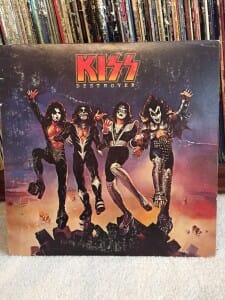 Continuing with (IMO) great and iconic album covers, I present to you Destroyer from “the hottest band in the land” KISS.

Destroyer came on the heels of their worldwide hit KISS ALIVE!, which was the biggest selling live album in history. Knowing that the follow up album to this had to be every bit as good, an artist was sought out to produce the album cover.

Enter Ken Kelly. Born in 1946, Ken was always interested in art as a kid, but didn’t pursue it as a career until he left the Marines in 1968, after a four-year term. Back in New York he sought the guidance of fantasy artist Frank Frazetta, who took him on as an apprentice and helped guide his early work.

In 1969, Ken landed a book cover project and has worked for every major publishing house since, including working on a series for fantasy writer Robert E. Howard.

For the Destroyer cover, Ken was faced with a tight deadline and many revisions, one for the first cover version being “too violent”, (it was the mid-seventies). The second happened as he was almost finished and was asked to start over and paint the band in their new costumes. According to all involved, Ken was a professional and took these challenges in stride with no complaints.

Growing up in the mid-seventies I can say that this was one of my first record purchases, and made me very popular at school, as the cover was so visually striking.

Ken also painted a follow up album cover for KISS, Love Gun, which is very unique and identifiable in its own right. He continues to work today and his website can be found at www.kenkellyfantasyart.com. 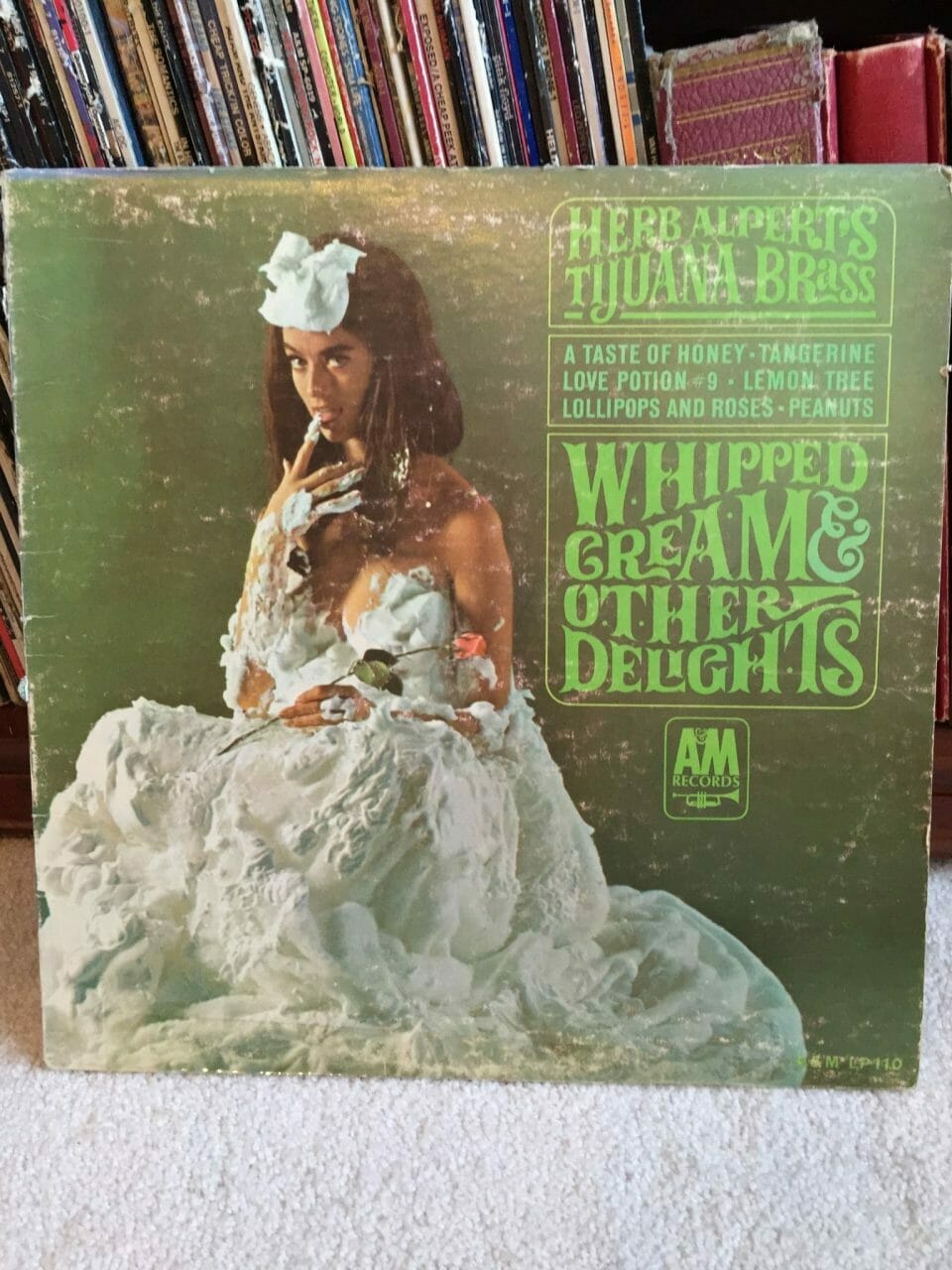 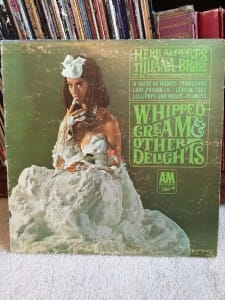 One of the things that has always been on my design bucket list is to design an album cover. Not just any album cover, an iconic album cover.

Besides design, one of my other passions is music. I played drums in a few bands in my teenage years up to my thirties. And when I was a kid, one of the album covers that got me interested in music was Herb Alpert’s Whipped Cream & Other Delights (shown here from my vinyl collection). I’m sure that I’m not alone when I say that it wasn’t the music that first drew me in; it was the cover. Who was that girl? Why was she covered in whipped cream? (And be honest guys, you stared at that cover wishing the whipped cream would somehow fall off in certain areas)!

Ahem, okay. Putting my design hat back on, this cover was designed by the photographer Peter Whorf and was shot in his converted garage studio. The model was Dolores Erickson, a fashion model and actress with several big name credits to her portfolio. Dolores is now a successful painter. In addition to Dolores, I love the color and the cool curved lettering of this album.

Back before iTunes, Spotify and the like, you either heard a song on the radio, at a friend’s house or party, or you were at a record store looking at album covers. And if the cover was good enough to grab your attention it prompted you to buy it. At least that’s what happened to me. Once I got the record home and put it on, there was this experience of listening, looking at the cover and maybe reading the liner notes. Many people are rediscovering that today, and I think there still is a place for good album art.

Once I actually got around to listening to this album, I liked it, and so did about 6 million other folks, because that was how many records that were sold. And even though it was released almost 50 years ago, you still hear music from this album today on the radio, tv and movies. Not sure if you’ve ever heard any of the music from this album? Check out this rare video below of Herb Alpert & The Tijuana Brass.

A cool album like this and an iconic cover…that would be fun to work on.

To read a great interview with Dolores about her experience being the star of this cover, click here.